Just west of Old Havana is the neighborhood of Vedado where we rented a room in a cozy apartment via Airbnb.  From the balcony, the Straits of Florida are visible as is the famed Malecon, a romantic stretch of road running parallel to the waterfront.  Cubans and tourists alike take advantage of this as a backdrop for their photos.  Many selfies are taken from the classic cars cruising the strip day and night. 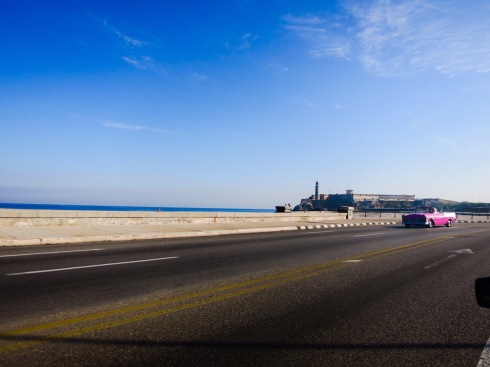 One evening, Jay was gracious enough to take a stroll along the Malecon with me to look for GC6XJQ (Primavera) which I knew was on a sculpture overlooking the sea. Trying to remain inconspicuous while searching for the geocache was a little difficult because of the muggles enjoying the plaza. So we pretended we were trying to get the perfect picture of me with the sculpture and no one was the wiser. Unfortunately, we had no luck. I did not know this one had been missing awhile because I had no internet access on the trip. However, the effort was not wasted because I got to see the neighborhood up close and personal instead of merely catching fleeting glimpses of it from a car. Heat, humidity and mosquitoes be damned!

As a well deserved reward for taking our trek, we headed to the Hotel Nacional for a night cap on the veranda.  Do you remember the “mob summit” from Godfather II?  Well, it is based on a real life conference which took place here.  This historic landmark has housed the likes of Winston Churchill, Ava Gardner, Vladimir Putin and Leonardo di Caprio.

Later in the evening, I realized there was a geocache hidden on the hotel grounds.  Because it was already dark, I had to come back in the morning to look for it. GC5B6F (Cuba Libre) turned out to be a wonderful surprise.  The geocache description directed me to look for trenches along the hotel’s landscaping and I soon discovered I was standing in a bunker used to house artillery during the Cuban Missile Crisis.  A nice older gentleman manning the exhibit gave us a tour of the trenches.  I couldn’t believe I had randomly stumbled onto such a significant piece of Cuban and American history.  Even better, I found the geocache!

On our last night in Cuba, it was time to check out a couple of the local bars I had read about in Thrillist.  My top choices were located in our neighborhood and within walking distance. I was most curious about Submarino Amarillo and couldn’t wait to see what a Beatle’s themed bar in Cuba was like. The space was dark and covered in fun Beatles inspired murals. 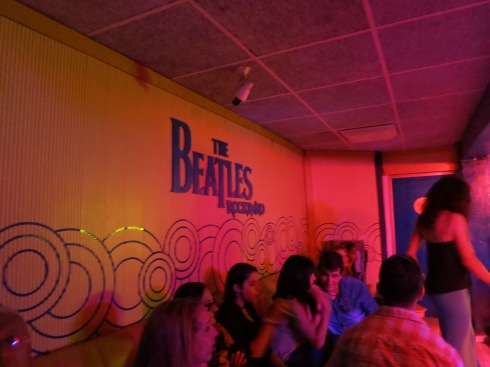 There was a great live band playing 70’s rock with so much energy the crowd was dancing and singing along.  For an additional dose of the Beatles, there is a John Lennon statue in the park across the street waiting on a bench for someone to sit down and snap a picture with it.

For a more sedate and elegant atmosphere, El Madrigal is less than a block away.  This bar is in a gorgeous house renovated by Cuban film director, Rafael Rosales.  The art and decor is modern and whimsical which I found to be a nice change of pace.  The space became even more lovely as the evening wore on and the light from the sunset cast a rose gold over this already beguiling setting.  I wish I had more time to have paid a visit to some of the other bars on the list because this evening ended up being a highlight of the trip.