I have lived in the Bay Area my entire life and this was only my second time to the Presidio. It always seemed so distant and cold to me that the effort didn’t seem worth it. But yesterday, I was lucky enough to experience San Francisco on one of those rare days when the air is dry and still and the sky so clear and brilliant it takes your breath away.

What initially drew me here was Explorapalooza, an event hosted by the Presidio to highlight all the park has to offer via a variety of self guided activities like hiking and scavenger hunts.  Geocaching was on the list and I knew my favorite geocaching duo would be there so I convinced Joel MacD and Chico Suave to accompany me for a day of adventure.

After saying hello to Joyful Nomad(s), there to introduce newbies to the game, I jumped right into geocaching which took us to awesome vista points as well as less prominent locations showcasing interesting tidbits of the park’s history. A great place to start is the recently opened Visitor’s Center where you will find exhibits, schedules of events, maps and a gift shop for souvenirs and sundries. Outside, you will have the chance to score not one, but two geocaches. GC7JX0A (Centro de Visitantes del Presidio) is there to welcome you and get your feet wet. I was thrilled to find the caches were all good sized containers large enough to hold some good swag!

The Presidio also has some great virtual caches. I knew that Buffalo Soldiers were some of the earliest stewards of the National Parks; however, until GC7B7E2 (Buffalo Soldiers), I did not know their influence extended this far west. It turns out they were stationed at the Presidio during winter months while spending summers in the Sierra building infrastructure for Sequoia and King’s Canyon National Parks. Come to think of it, I only yesterday realized the Presidio was a national park!  Now I have to go back to get my National Park Passport stamped.

The next geocache took me back to my college days when I had written a paper about the signing of Executive Order 9066. It was from this building that the resulting military orders were issued initiating the process for removing over 100,000 Japanese Americans from their homes to internment camps during World War II. GC6KQWV (A Stain on American History) is an important reminder of this horrific part of our country’s history. Right now, the Presidio Officer’s Club even has an exhibit about the Presidio’s role in the incarceration of the Japanese. 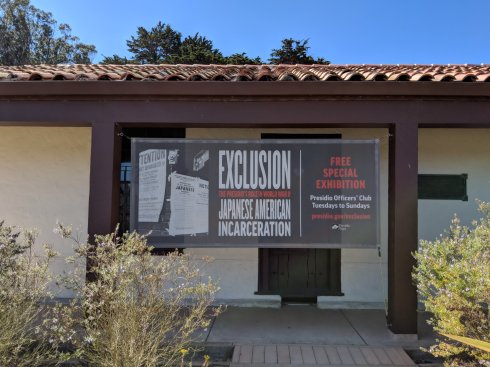 If you are willing to work for a stunning view, head uphill to GCJJF2 (Inspiration Point Poetry). I never knew this land originally consisted of sandy beach and marshland until the army planted over 100,000 trees between 1886 and 1897 to create the dense forestland we see now.  I took some photo ops with my geocaching buddy Chico who was the muse for the poem challenge required to log this cache. 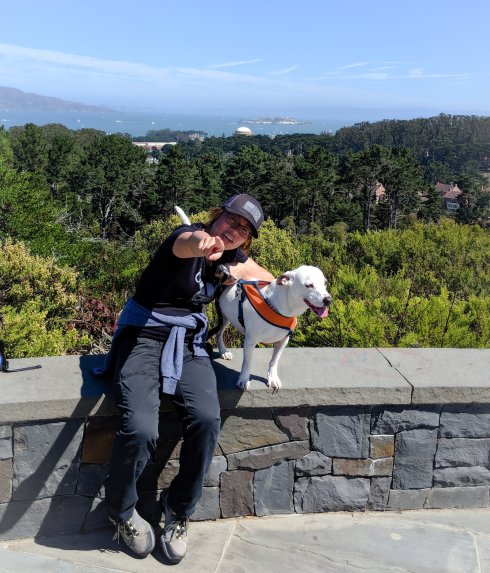 On the peak peak

For the meek meek

It was a banner day full of discoveries. Not only did I find a total of seven caches, I also made some friends who thought I was a famous professional geocacher.  If only!

Next visit, I am going to check out Arguello, a restaurant with an awesome looking menu and a nice patio for al fresco dining. 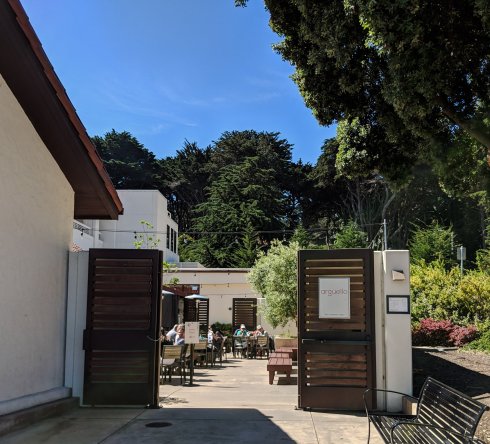 I also want to do the Tennessee Hollow Watershed Walk, spend more time exploring the new lodging options, and I didn’t even mention the Walt Disney Family Museum that I have yet to set foot in. Can you believe that? If you have any recommendations for anything else I should see on my next visit, I would love to hear from you.

2 thoughts on “An Explorapalooza to Remember at the Presidio”