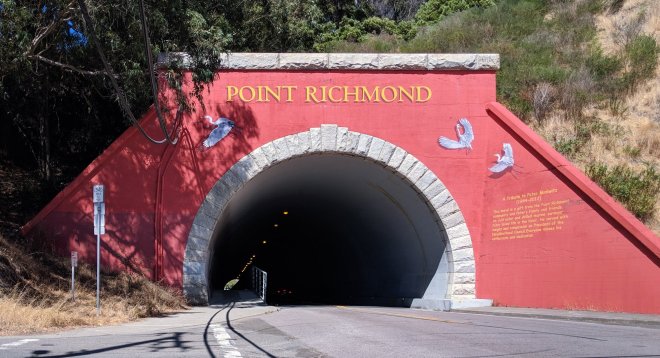 Many may think that every summer day in California is a perfect “beach day” but that is not usually the case.  More often than not, many Northern California beaches are fogged over in the summertime despite high temperatures found only a few miles inland.  But given today’s sky was so perfectly blue, and feeling like summer was already slipping away, we decided to take our chances and head out to Keller Beach in Point Richmond, one of my favorite local getaways.  We were in for a treat because the beach was sunny and beautiful despite the huge fog bank already enveloping most, if not all of San Francisco, and looming just past the Golden Gate Bridge.

This beach was gifted by the City of Richmond to the East Bay Regional Park system and is now part of the Miller/Knox Regional Shoreline.  Just a stone’s throw away is a myriad of park trails extending from the flatlands along the water up into the hills.  These higher elevations offer some of the most spectacular views available of San Francisco Bay.  The park is even featured in this year’s East Bay Regional Parks Trails Challenge, which is a free program set up to encourage the pubic to get out and explore the parks. Modeled after a marathon, trail blazers are awarded a commemorative pin like one of these after logging the requisite 26.2 miles or 5 of the featured trails.

Since today was the start of Geocaching Streak Week, I thought I would take advantage of being in uncharted geocaching territory.  Unfortunately, my first attempt to find a cache ended up being a confusing mish mash. I realized after reading previous logs that the Letter Box cache I found at GZ was not the traditional cache I was looking for.  Despite everything else at GZ matching the description for GC6RKVZ (Inside the Iron Giant!), it became readily apparent that the cache must have been muggled.  All that remained was a piece of ribbon that was used to hold the cache in place.

Fortunately, a nearby virtual cache saved the day… as usual. When GCA38E (Jeopardy: A LooneyTunes Puzzle Cache) first popped up on my phone, I saw the words “puzzle cache” and immediately went into panic mode.  However, once I settled down, I was able to read the cache description and realized, I can do this!  Not only did I get to log a successful find to start my streak, this cache had the added bonus of getting me inside a building that had intrigued me for the last decade.  I may even come back to practice my swimming!

While Point Richmond started out as the City of Richmond’s downtown and was formerly a bustling ferry stop for commuters heading into San Francisco, it is now a sleepy village with a quaint historic district where you can stop for a drink or a bite to eat.

There is a magical quality to the place because I somehow always leave here feeling rejuvenated and at peace with myself.